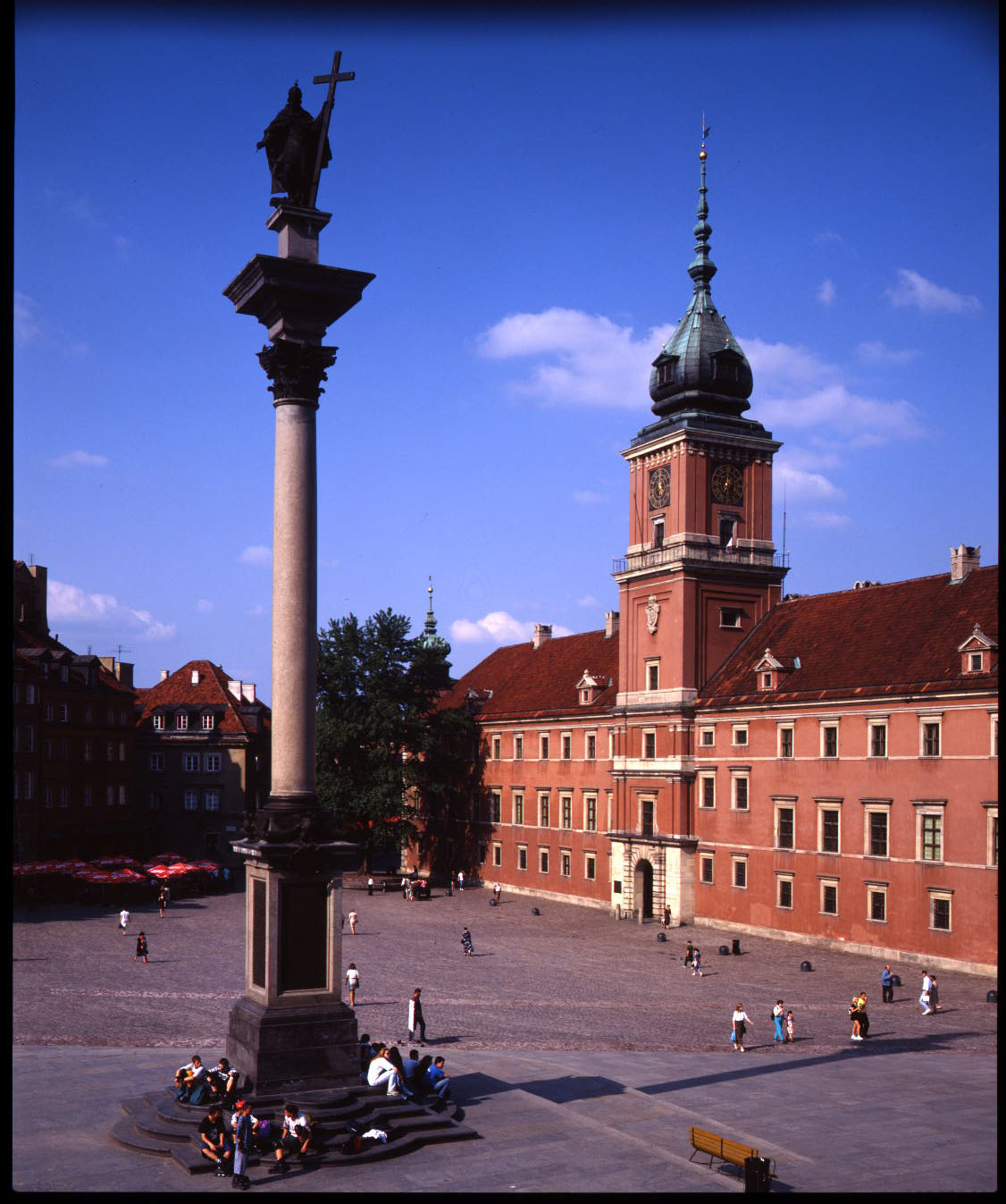 The early years of the wooden castle of Warsaw are almost parallel to the creation of the city and can be traced back to the late twelve or early fourteen centuries. The establishment of a ducal seat at the place of the Royal Castle is attributed to duke Bolesław II, who managed to unite all of Masovia during his reign (1294-1313). It was a period that marked the end of the feudal fragmentation of the Kingdom of Poland and only Masovia remained independent for the next two hundred years. The Duchy of Masovia was governed by a younger branch of the Piast dynasty that ruled Poland from 960 to 1370.

In the first forty years of the fourteen century Warsaw grew as an important center of Ducal power becoming the leading town of the Duchy in the years 1350-1355 under Kazimierz I Trojdenowicz (1341-1355).

The appearance and importance of Warsaw are significantly changed under Janusz I the Older (1373/1374 - 1429), who as a builder of towns and numerous castles was compared to the King of Poland Casimir III the Great (1333 -1370).

The oldest brick building of the Ducal castle, preserved to this day in its basement and ground floor parts, is the Great Tower also later called Grodzka Tower. According to most scholars the tower was erected around the half of the fourteen century, but others suggest that it was already standing in 1339.

The Grodzka Tower was the first brick structure of the then mostly wooden burgh. It was not until 1379 that duke Janusz I the Older required the Warsaw townspeople to build missing fragments (from the south and east side) of the wall around the ducal castle connecting it to the city fortifications still visible today.

At the beginning of the fifteen century Janusz I commenced the building of the grand ducal home (named in the documents Curia Maior or Curia ducalis). This construction was linked to the rapid growth of the importance of Warsaw, which was overshadowing Czersk the former capital of Masovia (south of Warsaw).

Bolesław IV (1429 – 1454), whose reign was a prolongment of that of Janusz I, continued the investments made by his grandfather. He tried to strengthen the position of Warsaw as the seat of his power and the main residence of the ruling family.

His grandsons were the last rulers of the independent Duchy of Masovia. After the death of Janusz III (1503 – 1526) who died without an heir Masovia was incorporated to the Kindom of Poland and thus the ducal castle of Warsaw became a royal residence of the Polish monarchs.

At the threshold of the early modern period new functions were assigned to Warsaw and the castle as they became one of the seat of the royal court and the authorities of the Polish-Lithuanian Commonwealth. The central position of Warsaw between Cracow the capital of the Crown of Poland and Vilnius the Great Duchy of Lithuania’s capital favoured the gradual growth of the city’s importance, thus initiating a century-long process of shaping the modern center of the Polish statehood.

It was at the Union of Lublin of 1569 that Warsaw and the Castle were designated as the permanent place of sessions of the Sejm (parliament) of the united Commonwealth.

The first king to establish his court and high ranking state officials at the Castle (marshals of the Sejm, chancellors, vice-chancellors and treasurers of the Commonwealth) was Sigismund II Augustus (1548 – 1572) the last king of the Jagiellonian dynasty who did so in 1568.

He also initiated large scale works to expand the castle and the construction of a bridge over the Vistula river, investments emphasizing the importance of the city as a link between the Crown of Poland and the Great Duchy of Lithuania.

During the reign of King Sigismund III Vasa (1587 - 1632) the seat of the Commonwealth royal power was transferred to Warsaw (1596) although Cracow remained the official capital and the place where Polish kings were crowned. It is under his reign that the Castle underwent large-scale expansion and was transformed into a five-winged edifice with an inner courtyard that gave the Royal Castle its present look. The castle became the royal residence, the place where parliamentary deliberations were held and the administrative and cultural centre of the country.

In the middle of the seventeen century during the Swedish Wars (1655-1660) also called the Swedish Deluge the castle was partially destroyed and looted. It gradually regained its former magnificence during the reign of the Saxon-Wettin dynasty at the end of the seventeen and the first half of the eighteen century. It is under the Wettin kings that the castle gained a new monumental wing in baroque style that we can admire to this day from the Vistula river side and castle gardens.

In the second half of the eighteen century, artists in the employ of Stanislaus Augustus (1764-1795), the last king of the Polish Lithuanian-Commonwealth, (Jan Christian Kamsetzer, Marcello Bacciarelli, Domenico Merlini) reconstructed the interiors of the chambers, comprising the Great Apartment and the King's Apartment as well as numerous other chambers in what became known as the „Stanislavian style” inspired by the neoclassical style.

During the period of the partitions (1795-1918) when Poland ceased to exist the major part of the collections of the last Polish king ended up in Russia. Symbols of the Polish-Lithuanian statehood in the castle were removed by the Prussian authorities. The castle briefly regained its splendor when the Duchy of Warsaw (1807-1815), a rump Polish state under French protectorate, was established by Napoleon Bonaparte who stayed in the castle.

After the congress of Vienna in 1815, Warsaw and the Castle became the seat of the Russian controlled Kingdom of Poland (1815-1832). The tsars of Russia, were crowned kings of Poland against the will of the majority of Polish people. One such coronation took place in 1829 (Nicholas I crowned his wife as queen of Poland) in the Senate Chamber where in 1791 the 3 May Constitution was passed.

Following the failed November Uprising of 1830-1831 against Russia the interior of the Royal Castle was further damaged or dismantled such as the Marble Room with its representation of Polish Monarchs. The castle became the seat of Russian civil and military authorities, and remained so until 1915 when the Russians fled Warsaw after their defeat against the German army.

After Poland regained its independence in 1918, some of the works of art stolen by Russian occupiers were reinstated to their rightful place in the Castle. In the interwar period the Royal Castle was gradually renovated and given back its place as a symbol of Polish statehood, thus becoming the seat of Poland’s II Republic president Ignacy Mościcki (1926-1939).

In September 1939 the Castle was bombed by the Germans, however museologists, under the leadership of Professor Stanisław Lorentz, managed to salvage some elements of the interiors and some of the works of art. Adolf Hitler ordered the destruction of the Castle that was supposed to be blown up in January 1940 although the decision was cancelled due to the fact that the destruction of the Castle might have weakened the Kierbedź bridge vital for the German army.

In the subsequent years of the German occupation the castle was methodically robbed and plundered by the occupier. The roof of the castle that collapsed during the siege of Warsaw in 1939 was deliberately left unrestored to cause additional damage to the overall structure of the castle.

From 1946 partial renovations were made to secure what was left of the Royal Castle, namely the Royal Bibliotheque, the Kubicki Arcades, parts of the basements and the Copper-Roof Palace adjacent to it.

In the years 1945-1970, the Communist authorities delayed making a decision on whether to rebuild the Castle. The decision to do so was finally taken in 1971. Civil society committees were organized all across Poland and in many foreign countries with large Polish communities such as the US, Canada, France, Argentina, etc. Prof. Stanisław Lorenz the informal leader of the reconstruction and the saviour of the Castle in 1939 was touring the Polish Peoples Republic embassies across the world to appeal to Poles to donate funds for the reconstruction. Funds gathered for the rebuilding of the Castle, which took until 1980 were provided entirely by those committees which existed from 1971 until the end of the reconstruction of the Royal Castle in 1984 when the interiors were opened to the general public.

This did not mean however that the Royal Castle complex was fully rebuilt.

Between 1994 and 2009 the Kubicki Arcades, one of the few saved parts of Royal Castle, were restored. From 2013 until 2015 the Upper Garden, located on top of the Kubicki Arcades, was meticulously restored too. The last part of the reconstruction of the Royal Castle complex took place in May 2019 when the Lower Garden was rebuilt and reopened to the public.

In 1980, the Royal Castle, together with the Old Town was registered as a protected UNESCO World Heritage Site.